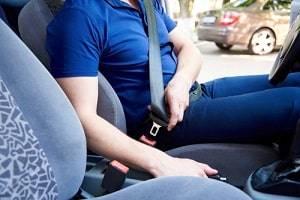 The National Highway Traffic Safety Administration (NHTSA) reports that approximately 90 percent of vehicle occupants in recent years use a seat belt and that seat belts save almost 15,000 lives each year. However, failing to wear a seat belt is still a significant factor in many vehicle-related deaths, as 47 percent of people killed in vehicle accidents in 2017 were not wearing a seat belt at the time. Even if you survive a car accident in which you were not wearing a seat belt, you may experience serious injuries resulting in costly medical expenses and a lasting impact on your quality of life. Furthermore, your failure to wear a seat belt may actually result in less compensation in a personal injury case.

California law requires vehicle occupants to wear a seat belt under most circumstances in recognition that doing so is the most effective way to save lives in the event of an accident. If you are wearing a seat belt and driving responsibly and you are involved in an accident caused by another driver’s negligence, you may be able to reduce or avoid serious injuries entirely. If you are seriously injured under these circumstances, you can make a strong claim that the other driver was completely at fault for the accident and seek full compensation for any damages resulting from your injuries.

Too many state legislators have become lackadaisical about moving forward to try to enhance laws to improve traffic safety. While deaths from car accidents went down for approximately 10 years, they appear to be rising again. It's possible that motorists and pedestrians in California and elsewhere are being endangered by this seeming complacency.

This is the contention of a nonprofit highway safety group that monitors how states are doing on implementing 15 different common laws that affect traffic safety, including those governing distracted or intoxicated driving, teen motorist safety issues, and seatbelt use. In the first three quarters of last year, traffic fatalities were up by 7.1 percent over the same time period the previous year. That appears to be the biggest such leap to have occurred since 1975.

Two years ago, there were 22 newly enacted traffic safety laws nationwide. By 2012, only 10 additional laws had been enacted. Progress has stalled on getting more states to enact primary seatbelt laws, which allow law enforcement to make stops of drivers believed not to be wearing a seat belt, instead of only enforcing seat belt laws when motorists are stopped for other reasons. Last year, of the remaining 18 states without a primary seatbelt law, not one adopted a single law regarding seat belt safety.

Among other laws being introduced in 2012, one requiring booster seats for children under the age of 8 has hit California and 30 other states. Proponents of Senate Bill 949 say it will go a long way toward reducing the rate of car accident injuries among school-aged children.

Before this year, the safety seats were required for children up to age 6 or those who weighed less than 60 pounds. The new law applies to children up to 7 years old, or any child under 4 feet 9 inches tall. Children must also ride in a back seat. The only exceptions are for pickup trucks with no rear seats, or if all the rear seats are occupied by children under age 7. Medical issues and vehicles in which a child restraint can't be installed are other possible exceptions.

Seat belts were designed to fit adults, say child safety advocates. If a vehicle is involved in an accident, the impact could seriously injure a child who is restrained at the abdomen and not the hips, where a lap belt is supposed to cross a person's body. A booster seat lifts the child up so the seat belt fits properly. According to the National Highway Traffic Safety Association, children are 45 percent less likely to be injured in a crash if they're using a booster seat instead of just a seat belt.