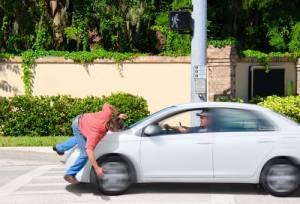 Walking instead of using a car for transportation has many environmental and health benefits. Unfortunately, recent studies show that simply walking down the street is now more dangerous than ever. According to a report published earlier this year from the Governors Highway Safety Association (GHSA), pedestrian deaths from car accidents are higher than ever. In 2008, a little over 4,000 pedestrians lost their lives in the United States. In 2017, that number had risen to just under 6,000 deaths. If you or someone you love was struck by a vehicle, you may be entitled to compensation for your damages.

Night Continues to Be the Most Dangerous Time for Pedestrians

The overall number of pedestrians who were killed in traffic incidents has risen dramatically in recent years. In fact, pedestrian fatalities for 2018 are projected to be the worst in nearly 30 years. Interestingly, daytime pedestrian fatalities have remained relatively constant while nighttime incidents have increased dramatically. During the period from 2008-2017, approximately 90 percent of pedestrian deaths happened at high. Experts suggest wearing reflective clothing when walking at night whenever possible.

Intoxicated Drivers are a Major Risk to Pedestrians

Not surprisingly, being under the influence of drugs or alcohol drastically increases the chances of being involved in a car accident. Nearly half of all pedestrian fatalities in 2017 involved a driver under the influence of one or more substances. Federal regulators are working to figure out other reasons for the extreme rise in pedestrian fatalities. Some believe that the rise in deaths could be related to the increasing number of larger vehicles like trucks and SUVs on the road. Distracted driving is also a major concern for both motorists and pedestrians. Texting and driving is a disturbing trend which is especially hazardous.