Posted on August 30, 2017 in Workplace Accidents 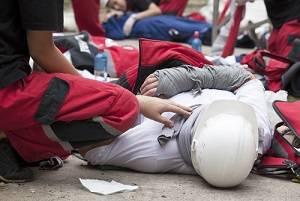 The best and most appropriate route for obtaining the compensation you deserve following a workplace injury depends on a number of factors. First, the cause of your injury is important. If you were injured in an accident that nobody else caused while in the normal scope of your job, a personal injury lawsuit will probably not be necessary.

However, if your injuries were caused by a third party that is not your employer, a third-party personal injury lawsuit may be appropriate. For example, if you were driving a company car on company time and another driver caused an accident in which you were injured, you could file a lawsuit against the at-fault driver. Another common scenario involves multiple companies working in relationship to one another. Consider a construction site with many different contractors working at the same time. If you were performing your job and were injured by the negligence of another company’s employee, a third-party suit against that company could be necessary.

A similar set of circumstances was in question recently in a Riverside courtroom, where a former security guard was seeking damages for injuries he sustained while on the job. The man was employed by a security services company and was contracted to work in a PennySaver plan in Jurupa Valley. He suffered serious injuries in October 2013 when he was hit by a forklift and dragged for several feet. The accident crushed and degloved the lower portion of his leg, which had to amputated two years later. Earlier this month, a jury awarded the man $17 million in medical expenses, pain and suffering, and future costs associated with losing a limb. The man’s third-party lawsuit was appropriate because although he was injured at work, his injuries were deemed to be the responsibility of a company other than his employer.

If you have been injured on the job as the result of another party’s actions or negligence, you may be able to file a third-party claim to get the compensation you need. Contact an experienced San Jose workplace injury attorney for guidance in exploring your available options. Call 408-293-7777 for a free consultation with John J. Garvey, III today.