Drowsy Driving: Studies Indicate Just as Dangerous as Driving Under the Influence 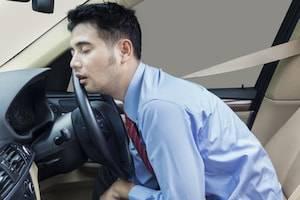 As the Centers for Disease Control and Prevention (CDC) continually surveys the quantity and quality of our sleep habits and the devastating events associated with the lack thereof, sleep is now recognized as a public health issue.

Moreover, the exploration of behaviors and disorders are also being closely monitored as our sleeping habits are now linked to motor vehicle accidents, personal injuries, industrial disasters, and even medical and other occupational errors.

Another leading authority, the National Highway Traffic Safety Administration (NHTSA), reports that driving while drowsy can be dangerously compared to driving while under the influence of alcohol, but without the benefit of a breathalyzer.

The NHTSA estimates that over 100,000 vehicle accidents per year can be contributed to driver fatigue. This is an estimate as it is difficult to attribute “drowsy driving” as the initial cause of the accident on an accurate basis. Other contributing factors include:

As the National Sleep Foundation (NSF) reports, 60 percent of all adult drivers have admitted to driving while drowsy with more than one-third admitting to actually falling asleep behind the wheel. So who is classified as at risk?

As per a recent study, those who sleep less than five hours are at a higher risk for a vehicle accident by four or five times than those who sleep eight hours per night. Another study stemming from Australia showed that being awake for 18 hours can be compared to a blood alcohol concentration (BAC) of .05 and feigning sleep for 24 hours can produce a BAC of .10, topping the legal limit of .08 BAC.

The warning signs of deciding whether or not to drive while under the influence are quite similar to those often associated with drowsy driving and include:

Another notable research finding is that nearly one-quarter or 23 percent of the population admits to personally being associated with someone who was involved in a motor vehicle accident due to falling asleep at the wheel.

If you have been recently involved in a motor vehicle accident and believe the other driver was at fault due to drowsy driving, San Jose, CA personal injury attorney John J. Garvey, III would like to discuss your situation. Just as those injured by a driver under the influence, you may be entitled to punitive damages in addition to payment for medical bills, lost wages, and pain and suffering. Contact our office today at 408-293-7777 to learn more about your legal rights.